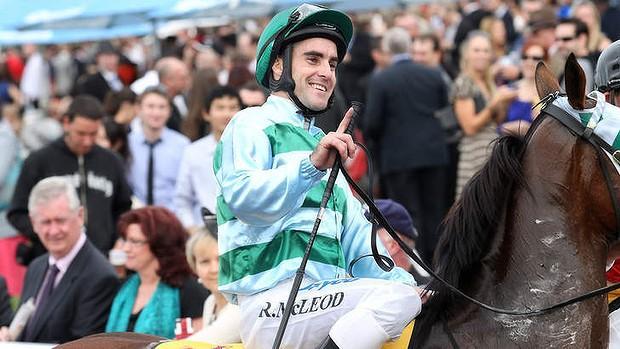 Whilst some believe that Rhys McLeod's idea of a treble is 3 good waves in a row at Bells, Rhys, (Goo to his mates) had a real day out at Racing.com Park on Sunday 12th April, scoring 3 wins from 3 rides!

Race 1 saw the maiden win for Dan Zephyr (Danbird – Eliza Dream), deserved favourite after 2 placings at his previous 2 starts.   Dan Zephyr was bred by Colin and Denise Purss and partners, and they also owned and raced his dam, Eliza Dream.  Pat trained her to win 3 races from 14 starts, with Rhys riding her in her final race.  Many of the original owners of Eliza Dream have kept the dream alive and are now racing Dan Zephyr, along with some new recruits.  Dan Zephyr has needed time and patience to get to the races, having his first start as a 4 year old, but he is repaying the faith of connections with strong performances at each of his runs.

Rhys then partnered Travelling Wilbury to win race 2 – the GG Engineering maiden plate, and his final ride for the day was on Elle Excite in race 7, the Cardinia Shire Showcase.  Jumping from a wide barrier Rhys guided Elle down the outside of the field  to score a win by a whisker.  Elle has a loyal band of owners, and she regularly has a large and enthusiastic entourage at her races.  Congratulations to all concerned, and we hope that you enjoy your C-Elle-brations tonight!

Pat and Rhys have been a dynamic duo ever since Rhys came to Epsom Lodge as a size 8 teenage apprentice.  Although Rhys was not a rider when he started his apprenticeship, Pat discovered that Rhys had a natural athleticism and instinctive rapport with horses, nurtured by old Wilkinson, who to taught Rhys to ride gallops by nicking off on him!  Rhys also had brilliant balance and control, learned no doubt from surfing and skateboarding.  Rhys and Pat have partnered for many of the most important wins of their careers, including Ethiopia's ATC Derby win and Gondokoro's QTC Oaks win, and we consider him not only an integral part of the Epsom Lodge team, but also a much loved member of the family.