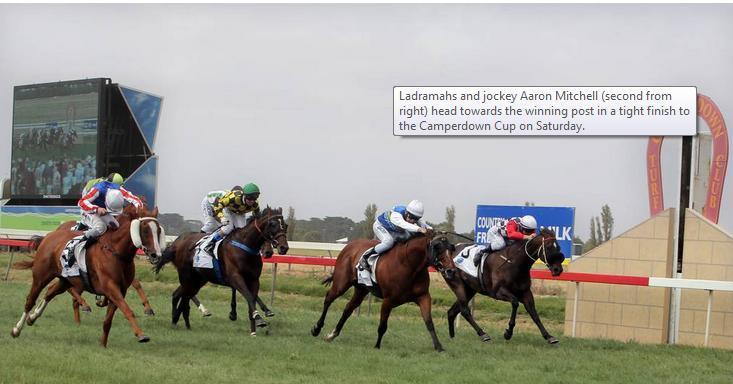 Apprentice Aaron Mitchell who is on loan to Pat Carey for 3 months had a huge day at picturesque Campberdown Racecourse on Sunday 19th January, riding in great form to score a three wins and a second place from 6 rides!

We are sure his parents and his Master who is also his grandfather (Wally Mitchell) are proud and happy to see him riding so many winners.

The day started off well with a second on Modo Mio for Wez Hunter in the first, followed by a win on Prussian Reign – also for Wez.  Next race resulted in a fifth place, then a win in the fourth on Intreeg for Brendan McCarthy.    Biggest win of the day was in the fifth race, the historic Camperdown Cup, riding Ladramahs for Shane Nichols. Aaron finished off an eventful day with a ninth on Melody Rock

It is fantastic to see that Aaron is getting good support from different trainers, and that he relishing the task. Aaron is gaining an enormous amount of experience by riding in the stronger Victorian Provincial races, as well as in town.  He is very dedicated to his craft, and spends a lot of time doing his homework before rides, watching replays and in discussion with Pat and his agent Morgan Betts.

We are very proud of Aaron who is a quiet young man, on this very special accomplishment and we hope that he continues to ride with enjoyment and success in the future.