WA all the way 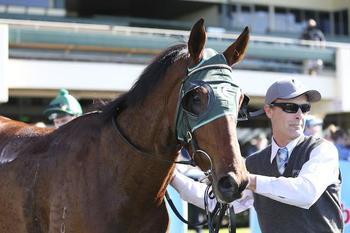 Aaron showed again that he has race-craft far beyond his years with a well timed ride, settling the horse towards the rear of the field and saving ground along the fence, before moving to the outside and allowing the big horse room to stretch out to the line.  This was an eye catching ride demonstrating patience and maturity, which will no doubt  bring Aaron to the attention of more trainers.  He can ride at 54kg, and is a confident and capable rider with the benefit of a  2kg claim in the country and 3kg in town.

It has taken a while for the penny to drop for Camacho, but Pat and the owners had faith that the son of Helenus would eventually put it all together.  Congratulations to the "Toddy" team of John and Judy, Bryan, Gary, Bruce and Rod, Dudley, Paul and Helen who bred Camacho when Helenus stood in WA, and sent him to Pat as a late 2 year old.

He won today in good style, and all going well it looks like there is plenty of fun to have with him in the future.