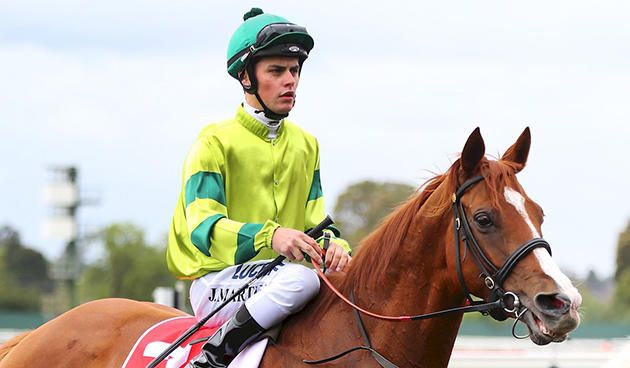 Wednesday’s Sandown meeting wasn’t the first city meeting at which Jack Martin rode a metropolitan winner, but it provided a first of sorts.

The apprentice jockey could not recall ever having to wait until he had returned to the mounting yard to learn whether he had won or not.

But that was the case after the running of the $35,000 Ridgeview Park Stud Handicap (1500m), in which he rode the Pat Carey-trained on-pacer Taylah’s Secret.

Martin was involved in a tight photo finish with the Brad Rawiller-ridden, Luke Oliver-trained La Consolidata and it was around five minutes before the judge announced his finding.

Martin was happy to learn that the photo went his way, but admitted to not knowing where to go when he brought Taylah’s Secret back to the yard.

“It was a bit weird to see the picture of Brad on the big screen and then it was going back to me,” he said.

“I was a bit confused when we got back to scale, but it was a good result in the end.”

Even though Taylah’s Secret was declared the winner, it took some additional time before the result was confirmed with the Oliver camp inspecting the image, along with Rawiller.

But once Rawiller saw the reverse image, taken from the inside of the track, he was happy to concede.

“I’m happy (to concede we were beaten) now that I’ve seen that,” he said.

Just a nose separated the first two over the line, who started at $6 and $7.50 respectively, while there was 1.25 lengths further back to third placegetter Timeless Style ($12).

“Her form hasn’t been her normal form of late, but she does like it here,” Martin said. “She’s won here before and I rode her here at one of my first-ever rides in town and just got beaten.

“So she likes the track and given how the race was going to pan out, I thought if she brought her best she’d give it a good shot and she did, which was great.”

Sickening, the $1.65 favourite, never travelled like the winner and beat home just one rival in the six-horse field, three lengths behind the winner.

The Sandown victory could be the start of a big few days on the metropolitan stage for Martin, who broke his metro duck at Moonee Valley in September, and will have his first ride for Lloyd Williams’ Macedon Lodge at the same track on Saturday.

The 21-year-old will partner imported galloper Carlo Bugatti in the 1600m Simpson Construction Handicap, which is Race 5 on the nine-event card.

“It’s a privilege to be able to ride one of his (Williams) horses,” Martin said. “I was a bit shellshocked when my manager said I had a booking for him on Saturday and to see my name down there today was pretty exciting.”

Carlo Bugatti is one of three rides for Martin at Moonee Valley on Saturday. He is also down to partner Dan Zephyr in the Montmorency Football Club Handicap (1000m, Race 8) and It Is Written in the William Hill Handicap (1200m, Race 9).