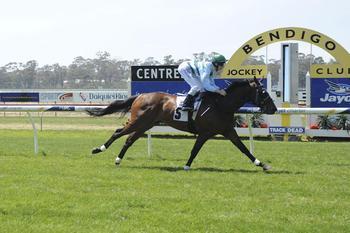 Salisbury broke through for his maiden win in emphatic fashion with a very strong win over 2400m at Bendigo on Caulfield Cup Day.  Apprentice Patrick Maloney gave him a lovely ride, clearing away in the straight to score by an amazing 12 lengths.  A subtle change of gear – the addition of a visor – did the trick for Salisbury, and he certainly put it all together on the day.

This is his first win from 9 starts, and his career history is very much like that of his brother ANGOLA who broke through for a strong (6.5 length) win at his 8th start.  Salisbury and Angola were bred by Trevor and Terrie Delroy of Wyadup Valley Farm, and is by their champion sire of stayers – Helenus – who tragically died earlier this year.  Congratulations to Trevor and Terrie and the Wyadup Valley crew, and to the Epsom Lodge team  – with a special mention to  farrier "Leroy" McDonald.  There were a few little tears when game mare Kasane left us to go to stud earlier in the week, and it was good to have something to smile about.

The win was a great birthday boost for long-time staffer Johnny, who has looked after many of the Wyadup Valley horses, both at home in Mornington, and when they travel interstate.  Johnny has a lifetime of experience in racing, starting as a jockey New Zealand, then moving to Australia with Jack McGreal in the 70's.   He is a much loved and valued member of Epsom Lodge's family, and we would all like to say  HAPPY 60TH BIRTHDAY JOHNNY!