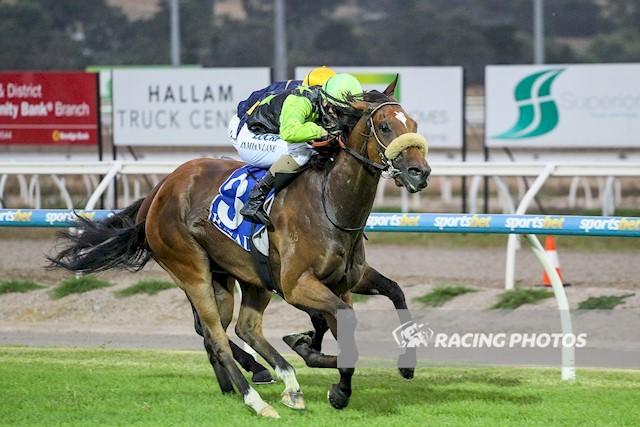 Forget  about black cats and walking under ladders, there was nothing superstitious about Maclairey(NZ) (Makfi – Dame Claire) winning his maiden at Pakenham on Thursday night, at his thirteenth start.  Maclairey is the first foal of Dame Claire who was a talented staying mare trained by Pat, and many of his owners were also involved in Dame Claire.

We are delighted that their patience with Maclairey has been rewarded as he has been slow to mature – as was his mother.   He has been circling the winners stall this preparation, with 6 seconds and 2 thirds before his breakthrough win – thanks to a very smart ride by Damian Lane.

It is exciting to have a few “second generation” horses in the team at the moment with Maclairey as well as De Little Sister who is a daughter of ARAPAHO MISS – our first ever Group 1 winner (VRC Oaks 2007), and Serengeti – an unraced 2YO son of GONDOKORO who was also a Group 1 winner (QTC Oaks 2013).  These young horses have big hoofprints to fill, and we look forward to their future careers with great anticipation.

Big thanks to our Epsom Lodge team for their commitment and expertise with all of the horses in our care.