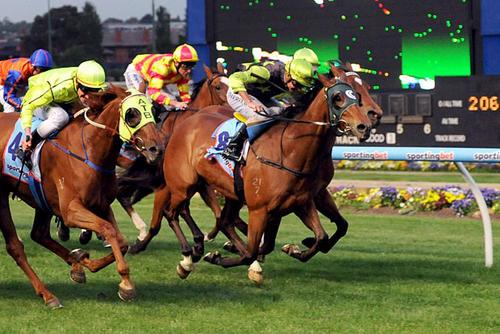 Congratulations to John Sweeney & Partners on Dame Claire's first city win!! The win was full of merit & determination off the bit at the 400 she weaved her way through the fields under the guidance of Peter Mertens,

The beautifully bred filly by Danehill Dancer Out of the Kaldoun Mare Lovely Actress who is a half sister of Cape Verdi winner of the English Thousand Guineas. Similarly she is bred along the same lines of our VRC Oaks Winner Arapaho Miss another daughter of Danehill Dancer and who's Grandam was also by Irish River.

She was purchased out of the 2009 Karaka Premier Yearling Sales for a sneaky $30k NZ.

The Following day Our Serena (Fantastic Light) raced by similar interests nearly brought off a stella 24hrs by going down a long Head in the $125k Sandown Cup to Olympic Win……..funnily enough finding the 3200m & the 600m straight to short on the day!!