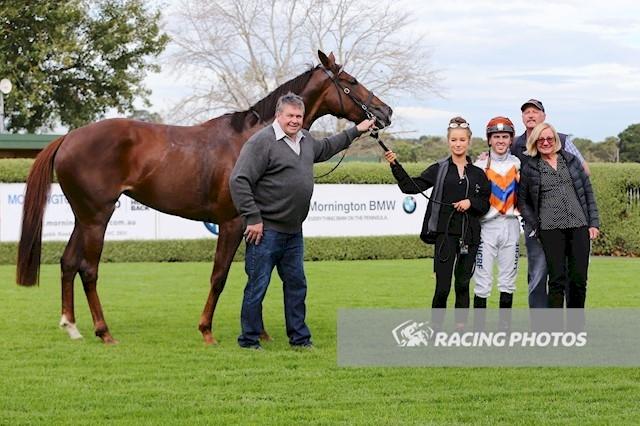 Dynamic filly Cuban Belle (Helenus-Cuban Girl) broke through for an encouraging win in the Ladbroke’s Multiwin Maiden over 1500m at Mornington on Monday 1st May.  Apprentice Ben Thompson gave her a great ride, making use of her early pace to be level with the leaders, then slipping to the front and holding off challengers to win by half-a-length – with her ears pricked.

Cuban Belle was bred by Keith Meadows of Meadows Bloodstock and Racing based in the beautiful Jamberoo Valley NSW.  Keith bought her dam Cuban Girl at a Magic Millions sale, and her other progeny to race are Cuban Missile – winner of 4 and Cuban Lass – winner of 6, with a new half brother Cuban Royale just starting out in his racing career.  Keith and his wife Jan made the trip to Mornington to watch her today, and he races Cuban Belle with an enthusiastic group of partners who will be delighted that she has won her first race today.

Cuban Belle is one of the final Helenus crop, and joins Captain Rhett (stakes placed) and Hellava Babe as his recent winners with several other promising youngsters still to come.

It has been a bit of a rocky road to the races, but with expert care and attention from the Epsom Lodge team – and a bit of emergency first aid from Dr Glenn Robertson-Smith at one time – Cuban Belle has thrived and today is hopefully the first step in a successful career.