Congratulations To Peter and Larissa Joyce 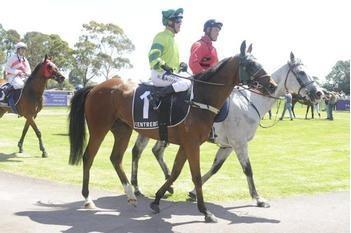 January is typically a dry month in Mornington, but yesterday at Epsom Lodge it was raining winners with two wins in ten minutes!

I Maximus led the charge with a sentimental victory in the Snowy Pratt Battlers Hcp at Pakenham this afternoon.  The legendary Snowy Pratt was a close family friend of the Joyce's, so that made the win even more special. This was followed minutes later by Angola's victory in the Rain Lover Hcp at Flemington.

Maxi's win made it  three wins in four starts for the cheeky little son of Exceed and Excel,  bought by Pat at the 2010 Sydney Classic Sale for $27 500. Owners Peter and Larissa Joyce bought into Maxi as a yearling, and have raced him with Cheryl Carey all through his career.  He was a bit slow to get off the mark, as he remained a maiden until half way through his 4 year old season, but Pat has done a great job to place him to best advantage, and he now has the respectable record of 4 wins and 6 placings from 28 starts.

This was a fantastic effort for pint-sized Maxi, carrying 59kg and breaking the race record!  Roger Booth rode with great confidence, and both horse and rider looked very pleased with themselves returning to scale, to be greeted by a very happy band of owners and friends.