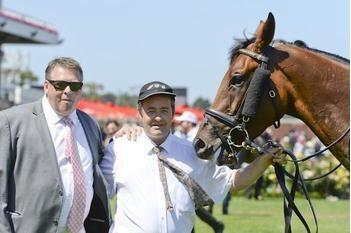 Angola has been racing with great heart in quality races recently and you could say he has been knocking on the door, so it was fantastic to see him score an encouraging win in the Rain Lover Hcp at Flemington on 11th Jan.  Ridden a treat by popular jockey Chris Symons, Angola turned in a strong staying performance to win by a length, making this his third victory from 19 starts.  Breeders and owners Trevor and Terrie Delroy of Wyadup Valley Farm have been patient with the big son of Helenus, and thankfully with maturity he is now coming into his own.

It looks like Helenus's 2008 vintage could well be his finest to date, with Angola, Gr1 winner Ethiopia and Listed winner Durnford among the crop.  As all are natural stayers and still lightly raced, it is possible that the best is yet to come from this talented trio.

Today's win has Pat thinking of a Mornington Cup start for Angola, with the Adelaide Cup a possibility on the far horizon.  The Helenus horses have shown a liking in the past for the Mornington Cup, with Cedarberg (2011) and Durnford (2013) both finishing in second place.  With a little bit of luck maybe it will be third time's the charm for Helenus.