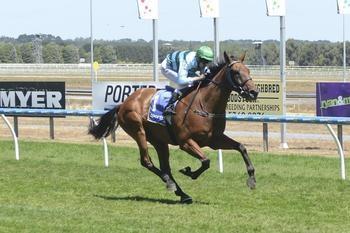 The run of Wonderful Wednesday Winners continued at Ballarat today (23rd January) where for the third week in a row Pat trained a winner on a Wednesday!

Angola, who ran second at Sandown 2 weeks ago (on – you guessed it – a Wednesday) delivered on the promise he has shown to win by several lengths easing up in a 1600m maiden.   The Helenus 4 year olds  are really coming into their own at the moment, with Durnford also winning his maiden earlier in the month.

Congratulations to Wyadup Valley Farms, breeder and owner of Angola, and to the Epsom Lodge team for having the horse in such top shape.  Well done also to Brad Rawiller who made it look so easy, guiding the horse to a well-deserved win.