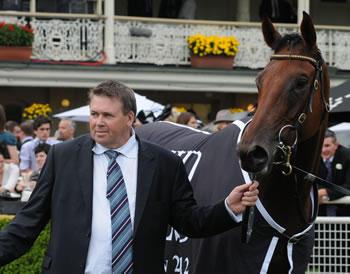 Fame certainly doesn't go to the head of Group One winning trainer Pat Carey and his wife Cheryl.

There was no business class flight home from Sydney to the Mornington Peninsula.

The old faithful Lexus, (a good 15 years old now) is zooming up the Hume Highway with Pat as pilot, Cheryl, wingman and both are still on cloud nine.

After the dust has settled and what can only be described as "Euphoria" for Epsom Lodge over the past few days, the most important thing is that the new star of the stable Ethiopia has come through the race with flying colours.

Carey has reported that Ethiopia will have a relatively light Spring Carnival, culminating in the Group One VRC McKinnon Stakes on Derby Day.

Following this, Ethiopia will be set for a fruitful Autumn Carnival with his main goals being the VRC Australian Cup and ATC BMW Stakes which of course Carey took out last year with the ill-fated galloper, Cedarberg.

It was a real team effort by all at Epsom Lodge to get Ethiopia to the post on Derby Day and I'm sure once all (Carey and staff) are reunited there will be plenty more celebrations down on the Peninsula.

In other stable news, the ever consistent Carey trained Our Serena was yesterday sold for $70,000 at the Australian Broodmare Sale in Newmarket, Sydney.

There are plenty of Epsom Lodge runners coming up over the coming weeks so stay tuned for more information and results.

Once again, Well Done to all concerned!