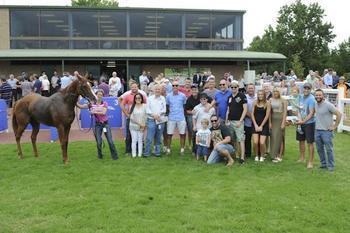 Yarra Valley was the scene of much celebration with the win of  Taylah's Secret (Reset-Secret Cove) on Saturday 28th February.  A well-judged ride by Jared Fry saw her sit patiently at the rear of the field, then start to wind up from the 600m mark.  When Jared pressed the GO button just before the turn she started to power home, going on to win by a length.

This is her first win from only four starts, and a very memorable day for her owners.  A large contingent made the trip to Yarra Valley, and they were very vocal in their support, and very enthusiastic in their celebrations!

The Turf Doctors syndicate were watching and listening from around the world, including Tim who listened to the race live on his apps whilst snowbound in Dallas, Texas.

Peter brought his father to Yarra Valley to watch the race, and they were thrilled with the win – Peter's first as an owner.  It was made more special by the fact that Peter's parents had their first winner at Yarra Valley – in 1978.

Congratulations to all of her owners: Peppermint Park syndicate, Ryan, Mark, Russell, Sam, Peter, Steve, Double Penny syndicate, Turf Doctors and Reebasevol syndicate.   Well done to all of the dedicated team at Epsom Lodge, including our vets and farrier Leigh – thanks for all of your hard work everyone.