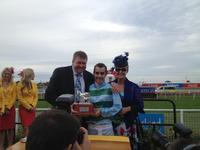 The old firm was back in town at Eagle Farm on Saturday 1st June, when Gondokoro, bred and owned by Trevor Delroy, trained by Pat Carey and ridden by Rhys McLeod, scored a strong win in the 2013 XXXX Queensland Oaks.

A masterful ride by Rhys saw him track the favourite through the race to the 800m mark, then drive through a gap and work strongly in the concluding stages to score a 3 length win.

Gondokoro now has a win, 3rd and 4th placings at Gr.1 level, and a second in Gr.3, all achieved in the last 10 weeks.

Gondokoro's win is the second Oaks for Pat, who trained Arapaho Miss to win the VRC Oaks in 2007, along with fourth placegetter Royale Harmony.

This is the third Classic race win in 2 years for Trevor and Terrie Delroy who bred 2012 ATC Derby winner Ethiopia (also trained by Pat and ridden by Rhys), and Gondokoro's full brother Zabeelionaire who won the 2012 SA Derby.

Ridden by Peter Mertens, she jumped with the field and raced handy, chasing down the tearaway leader The Cleaner to win by half a length from last year's winner I'm Jake, with Storm Burst in third place.

This is Dame Claire's second win in a Listed race, taking her career record to 6 wins from 27 starts, for winnings of $270,000.

Congratulations to Dick McCarthy Vinery Stud and Newlands Syndicate No. 2 on the win of their 5 yo Benicio gelding Cuban Sunday.

This is his 5th win from 17 starts, and his first black type win.

Well done to Michael Walker on an excellent ride to bring him home from the widest possible barrier to win by a neck. 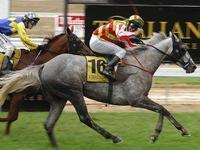 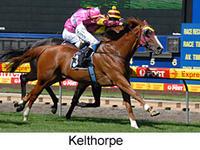 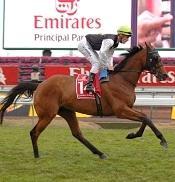