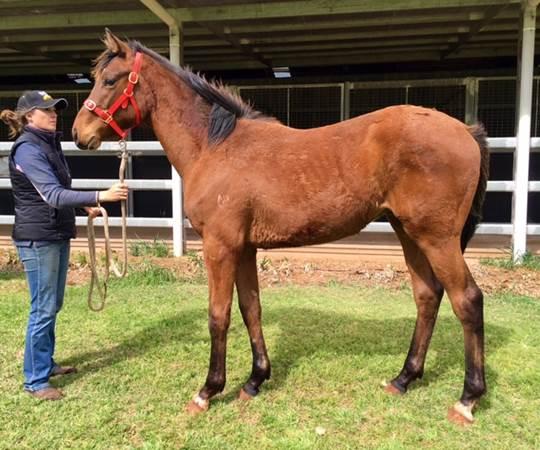 This photo is of a very special yearling, a striking bay colt out of our 2013 QTC Oaks winner GONDOKORO (NZ), by Gr1 winner CROWDED HOUSE (GB) outstanding winner of the Gr1 Racing Post Trophy as a 2 year old.  GONDOKORO was incredibly tough and brave as a racehorse, our fourth Gr 1 winner and second Oaks winner.  Within the short space of 10 weeks she won her maiden, placed 3rd in the Gr 1 ATC Oaks, ran second in the Gr 3 The Roses, then won the Gr 1 QTC Oaks, and came 5th in the Gr 1 QTC Derby.   CROWDED HOUSE who stands at Wattle Grove in NSW was a Gr1 winner at 2 and raced in England, Dubai and the US before coming to Australia to stand at stud commencing duties in 2013.  It should not be too long before we see his first progeny at the races, and we look forward to following his stud career with great interest.

The CROWDED HOUSE / GONDOKORRO colt is the result of a mating designed by highly successful owner breeder Trevor Delroy of Wyadup Valley Stud in WA,  who from a small band of select mares has produced Gr1 winners CEDARBERG, ETHIOPIA, GONDOKORRO and her full brother ZABEELIONAIRE.  GONDOKORRO is from the Carnegie mare Kisumu, herself placed at Gr 2 level, and she possesses the quality SADLER’S WELLS – DARSHAAN cross that is so highly sought after and seen in the pedigrees of so many champion racehorses throughout the world.