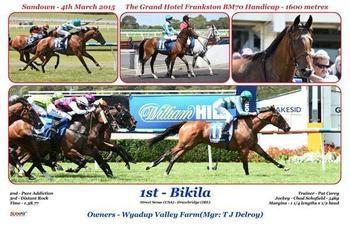 A clever and daring ride by Chad Schofield  brought out the inner-winner in Bikila (Street Sense - Drawbridge) at Sandown today.  Wearing the distinctive colours of Wyadup Valley Farm syndicate, Bikila defied his long odds to win the Grand Hotel Frankston Handicap by over a length - and still going strong.

Bikila had tended to over-race at his previous 2 starts, and credit goes to jockeys Aaron Mitchell and Rhys McLeod who have been instrumental in educating him in trackwork and races.  The hot tempo of this race allowed Bikila to roll along at a strong pace, and Chad made the most of his acceleration and boldness to guide him through a narrow gap between horses where in Chad's words he just "burst through".

Congratulations to Trevor Delroy and Wyadup Valley Farm Syndicate, breeders and owners of Bikila.  As Pat said today, Trevor has a breeding program with aspirations in mind, and if all goes to plan then this horse named in honour of Ethiopian Olympic marathon winner Abebe Bikila may follow in the footsteps of his namesake and be a stayer of the future.