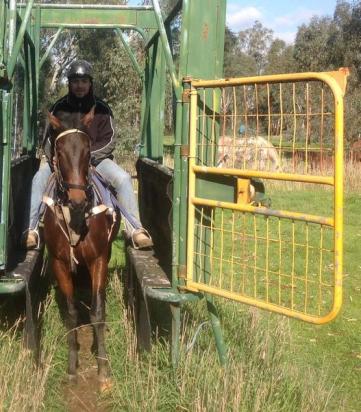 We were delighted to see that Super Saver, sire of one of our yearlings (Super Saver/Pleats, by Green Desert) has had his first winner.  This picture of our filly (out of Pleats) was taken as she was getting ready to work at Mark Thomas's in Seymour where she is going through her breaking in program.

"I Spent It scored the first win for former Eliza Park shuttler Super Saver in North America on Wednesday.

I Spent It (2c Super Saver – Rateebaby Sky Mesa) tracked the pace on his debut in a Belmont Park maiden before getting up late by three-quarters of a length.  He clocked 58.11s over 1000m.

Bred in Kentucky by Dixiana Farms, I Spent It cost owners Alex and JoAnn Lieblong $600,000 at the at the Fasig-Tipton Florida 2YO Sale earlier this year.  His dam is a winning half-sister to Japanese Group 1 performer Eishin Le Mars and the dam of USA stakes-winning sprinter Zavata.

Super Saver (Maria’s Mon) retired to WinStar Farm after capturing the 2010 Kentucky Derby.  He shuttled to Eliza Park for a one-off season in 2011 and his first southern yearlings averaged $53,500 at the Inglis Melbourne Premier Sale in March.

Top price of $105,000 was paid by Kitchwin Hills for the half-sister to LR Ken Russell Memorial winner I Have No Fear (Rock Of Gibraltar)."