London Stripe kicks up his heels at the Valley! 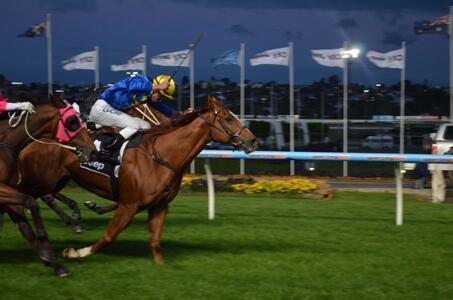 Moonee Valley is looking like a happy hunting ground for Epsom Lodge with tonight's excellent win by London Stripe.  It was a skilful ride by Steven Arnold, timing his run to the minute and scoring a well-deserved win by half a length.

London Stripe is beautifuly bred, being by Rock of Gibraltar.  He started his career in England, winning 2 from 6, and running second to Dandino (second in this year's Caulfield Cup and 5th in the Melbourne Cup) at Ascot in 2010.  He was recruited to the Macedon Lodge team, but sold in their 2012 annual reduction.  He had a few starts for his next trainer, then was away from the races for almost a year, until his first start for Pat in May 2013.

This is the horse's first win in Australia, although he has had his foot on the till, and it is a fitting reward for the patience of owner Steve Watkins, who races him with daughter Christy Watkins, and Sally Watkins of Willaroon Thoroughbred Agistment.

Congratulations to Steve and partners, and thanks again to all of the hard working Epsom Lodge team who take such excellent care of our horses.