Some good tonic for Epsom Lodge. 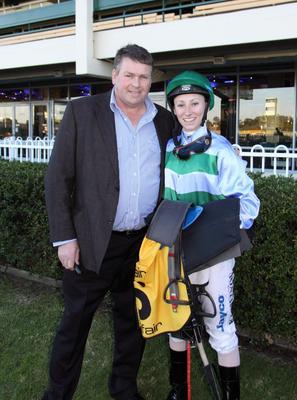 Katelyn Mallyon followed in the footsteps of her older brother Andrew when she partnered the Pat Carey-trained Karoo to victory at Betfair Park Sandown on Wednesday.


Mornington-based Carey provided Andrew with his first city winner, Kelthorpe at Moonee Valley in November 2005, and Karoo's win in the Ahern's At Highways After The Last Handicap (1600m) was Katelyn's first at a metropolitan course.

The 17-year-old said it was a huge thrill to break through after several near misses – including twice protesting against the winner after being second over the line – in metropolitan races during winter.

“I've been pretty frustrated but I knew it had to come one day, so it's fantastic,” she said.

“Andrew won on Kelthorpe and I've won on Karoo, so it's been a bit of a family tradition riding our first winner for Pat and I'd just like to thank him very much.”


She took the heavily-backed $5 chance to the lead and kicked clear early in the straight before hanging on to score by 1.5 lengths from Triumphant Choice ($5.50), who edged out $2.50 favourite African Heat for second prize.

Carey was thrilled to provide another member of the Mallyon clan with their first city winner, but he is certain it won't be Katelyn's last.

“It's a great story that,” Carey said. “They're both great kids and this girl has got a huge future. In 12 months' time, 18 months' time you're going to be looking at a really fine apprentice.”

The win was also satisfying for Carey with Karoo owned by the same group that raced ill-fated BMW winner Cedarberg, who died suddenly at Moonee Valley trackwork last Tuesday.

“I suppose every cloud's got a silver lining,” Carey said. “That was a pretty hard week for them last week, but this win will give them a lot of joy.

“This horse has showed us a little bit along the way. We probably run him in some tougher races, but he was well placed today with 50kg on his back – you don't see that very often – and aided with a beautiful ride he was able to capitalise on (having) no weight.”