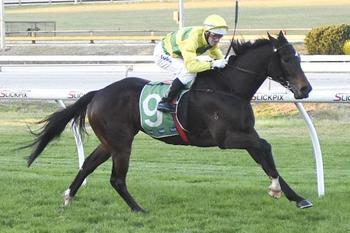 Congratulations to owner/breeder Michael Carlile on the emphatic win by Docking in the Trios After The Last BM70 at Cranbourne yesterday.  This was Docking's fourth win from 17 starts, and he won as he liked.

Jockey Noel Callow had Docking travelling after being slow away at the start, then shook him up as they rounded the turn.   Docking appeared to find the heavy track no trouble at all, and put a good space on the others in the straight to win by six lengths.  Whilst this was not a strong race it was pleasing to that it was the most convincing win of his career particularly as his other races were won by a short-half head, a head and half a length.

Well done to Noel on a nice ride and to the Epsom Lodge team.  It is great to be winding down the old racing season with our best ever results on the board, and looking towards the new one with a very nice crew of young horses and some very enthusiastic and supportive owners.