“RISING STARS OF THE FUTURE” 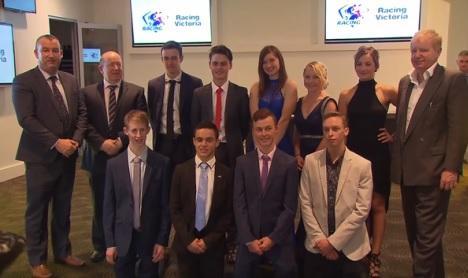 The graduating class featured and included Jack, and family friend Patrick Moloney among others, with Patrick receiving the Sports Science Award and the Outstanding Apprentice Award.

Here is a link to a short video presentation from Racing Victoria, which includes interviews with Jack,  Patrick and others along with Bernard Saundry of RVL and apprentice's mentor Matthew Hyland.

Having gained his certificate completing all of his theory Jack will now spend the remainder of his time as an apprentice by further developing his riding skills and race craft under the guidence of master trainer Pat Carey.  Jack still has a couple of years to go as an apprentice, and still claims 2kg in provincial races.

We send our congratulations to "Jack" in particular, along with the other nine apprentice jockeys who have graduated this year, and look forward to watching their progress in the future.