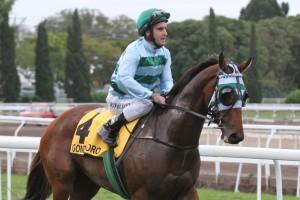 A Queensland Derby start remains on the table for Gondokoro.

Trainer Pat Carey said Gondokoro pulled up so well after her Oaks triumph, he was giving serious thought to backing her up in the Group One Queensland Derby (2400m) at Eagle Farm next Saturday.

“On face value she pulled up in terrific order straight after the race it puts the Derby right there as an option next week,” Carey said.

“I wanted to get past the Oaks first before I thought about anything else for her but she’s been nominated and paid up all the way through for the Derby.

“It’s not a given that she runs. It will all be about how she does over the next few days.

“We’ve got until Wednesday to make the call which gives me time to talk it over with the owners and see where we head next.”

Carey has stopped short of declaring the filly a certain Cups contender in the spring.

“There is no guarantee of a spring preparation when all those imported horses come into Melbourne,” he said.

“The obvious race for us is the BMW in the autumn.”

“He bred and sold this filly’s brother Zabeelionaire who won the South Australian Derby and winning the Oaks was the icing on the cake for him.”