Postcard from Randwick: No Sweat for Pat Carey 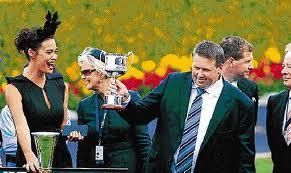 Steve says it restores your faith in the game to see the name Carey sandwiched between Kavanagh, Waterhouse and Waller among the major winners at Randwick on Derby day.You have to admire Pat Carey. Three individual Group 1 winners – Arapaho Miss, Cedarberg and Ethiopia (at 2400m and 2500m) – in the space of four and a half years from numbers which might be one tenth those going through the biggest yards.

Could any other small string trainer match that? I doubt it. It speaks to his patience as well as his skill, not to mention a bit of flair. After all, he wins the Derby with Ethiopia who's a maiden who's raced just three times; who hasn't raced for a month and is piloted by the unheralded Rhys McLeod.

Every picture tells a story they say and the one herewith says it all. Attention to detail. Can't imagine too many other trainers dashing to the horse in the parade ring and improvising with the racebook as a sweat scraper to brush the excess water and perspiration from the animal.

Many horse grooming tools have interesting names like the curry comb or the dandy brush. But the thing that scrapes the sweat is just that – a sweat scraper. Hardly very grand. I think that henceforth they should be known as Ethiopias.

And henceforth there won't be too many Carey trained stayers leaving the gates as 25/1 chances like Cedarberg in the BMW or 14/1 like Ethiopia in the Derby.

The enormity of his effort with Ethiopia cannot be overstated. The horse hadn't raced at all until two months ago; hadn't raced right-handed; hadn't raced on a good to firm surface and simply lacked the raceday nous and experience of his rivals.

Just one thing, Pat. Now, I know by your own admission that you're computer illiterate but you really ought to post the Derby win on your website. It wasn't there when I last looked Monday morning. There must be a child somewhere in the neighbourhood. They'll know how to do it.

It was nearly a huge day for the Mornington trainers. Young Nathan McPherson, with just five in work, managed to win the Sprint at Flemington with 25/1 chance Adamon. His charge met the favorite Liveandletdie 3 kg better for being beaten 1.4 lengths at the same course and distance on 18 February and yet was massive odds while Liveandletdie started $2.40. Gee, we can get it wrong.

And Carey's mate Tony Noonan should have won the Group 1 T.J. Smith Stakes with Varenna Miss. It's not often you'd say a horse who ran fifth of six in a race was a good thing beaten but jockey Hughie Bowman was adamant that was the case and I agree. Salt in the wounds for Noonan after the Dubai success of his former resident Ortensia.

Post race, the shots of Carey with his horse were the enduring images of Derby day. Mid race, however, it had to be the effortless and fluent action of comeback filly Atlantic Jewel who sat wide throughout and contemptuously swept aside her Sapphire Stakes rivals.

You simply have to say she's freakish – especially in light of what Mosheen has achieved in her absence this year. How many unbeaten superstars can we have at any one time? Black Caviar, Atlantic Jewel and Pierro are a remarkable trio. Not to mention, of course, Frankel in another part of the world.

Pierro's race smarts prevailed over All Too Hard in the Sires. The irony being that All Too Hard is still worth five or more times as much as his mighty half sister Black Caviar. I mean how many perfectly correct, million dollar plus yearlings can any mare produce? At least four would be the hope for those who paid $2.6 million last week for the other half sister, by Redoute's Choice. if she can't match the deeds of her elder siblings on the track.

Don't forget that Black Caviar has won only double what they paid for that yearling!

Still, the amount annually spent on yearlings now regularly exceeds total prizemoney on offer which seems illogical and means you've either got to be very lucky or find a stallion prospect….or maybe find a staying prospect an can give it to Pat Carey. Reckon you could do worse.