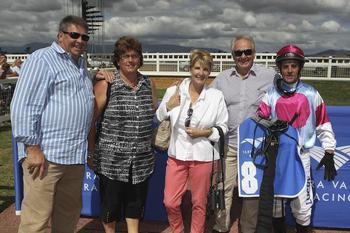 Point de Virage made an extraordinary return to racing today, 18 months from his previous start!  The five year old son of FASTNET ROCK scored a powerful win on a soft track at Yarra Valley today. Ridden confidently by Roger Booth, Point de Virage travelled comfortably throughout, pulling away from the competition to score by 4 lengths – his first win from 11 starts.

"Gobby" struggled early days which led him to be the paddock mate for the ponies for 12 months, but as it turned out  he never quite settled into being a pony, and it became clear to owners Susan Harris and Anthony and Liz Carey that he should have another chance at being a racehorse. After much discussion and a little more time it was decided to send him to noted Seymour horseman Mark Thomas for several weeks Pre Training before returning to Epsom Lodge for a renewed racing campaign

Later, a series of jump-outs showed that his compettive spirit had returned and he was quite strong in his trials. Whilst he lost nothing of his cheekiness during his "Gap Year", he developed and matured both mentally and physically and applied himself in his work with renewed enthusiasm. We congratulate Susan, Anthony and especially Liz for the work, faith and patience they have shown, not only in this horse but also in the P G Carey Racing Team.

His performance today is a fitting reward for all concerned and we are sure there is more to come.