Poetry In Motion is our “Lassy” 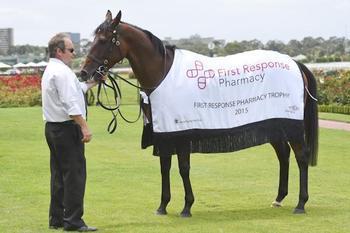 Gallant little mare Shakespearean Lass gave connections an early Christmas present on Saturday 12th December, with a strong win in the First Response Pharmacy Trophy at Flemington.  A subtle gear change suggested by jockey Rhys McLeod saw Shakespearean Lass jump well and take up a forward position, then scoot away to win by a couple of lengths.

This win ended a bit of a dry spell for Rhys as it was his first win at headquarters for 5 years.  During this time he has won several city races (including a couple of Group 1s) at the major Melbourne and interstate tracks, but luck has seemed to elude him at Flemington.

Shakespearean Lass was bred by Colin Purss and partners at Eliza Park, one of Victoria's premier studs and thoroughbred nurseries.  Colin races Shakespearean Lass, and her half-brother Dan Zephyr with a group of friends and family, and both horses have had very successful campaigns this time in.

Shakey now has 3 wins to her credit from 10 starts, and her big brother's record is 3 wins from 12 starts.   Thanks and congratulations to Colin and partners, to Rhys, to Pat and Cheryl, and to the dedicated team at Epsom Lodge who work hard to ensure that every horse goes to the races ready to do their best.