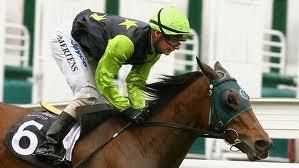 Pat Carey Racing Stables touch with stayers continued when Dame Claire scored an upset win at Flemington and set up a start in the Andrew Ramsden Stakes in a fortnight.

On Saturday Carey notified Racing Victoria stewards of a change of tactics with Dame Claire – to attempt to have the four-year-old mare ridden more forward in the Schweppes Plate (2800m) – with pleasing results.

Ridden by Peter Mertens, Dame Claire, eased from $13 to start at $20 but after trailing stablemate Starlet O'Hara ($101) outstayed her rivals scoring by 2-3/4 lengths from the $1.40 favourite Almodovar with High Kingczar ($18) a half length away third.

"She's been really frustrating. She hasn't been beginning and she's got a few traits that we've had to sort out but she applied herself up on the pace today," Carey said.

"She's been walking out of the gates and hasn't been able to put herself there. Peter was able to ride her effectively today and she was very good when she got up against the rail."

Carey said Dame Claire, who has won four of her 23 starts, would be worth a lot of money as a broodmare as she is from the same family as the English One Thousand Guineas winner Cape Verdi.

She is from the unraced Kaldoun mare Lovely Actress who is a half-sister to Cape Verdi.

"She's a Danehill Dancer filly from a very good family and a city win at Flemington will do her a world of good," Carey said.

"She ran well when fourth in the VRC St Leger last year. She's a year older now and she's entitled to be a bit stronger which she is.

"This (staying) seems to be her forte. She's very tough, she's a stayer with a kick."

Mertens was high on confidence having won the Group One Australasian Oaks in Adelaide a week ago aboard Invest.

"Pat's probably one of the up and coming staying trainers around at the moment. Look at his record," Mertens said.

"This was a mediocre 2800 metre race but his horses are always fit."

Mertens said Dame Claire was temperamental and tricky to ride.

"Her problem is just relaxing, she gets a bit keen in the run whether she goes forward or gets back she's always the same," he said.

"So if she gets a similar run as today with the cut in the ground she'll be hard to beat (in the Ramsden).

The Listed Andrew Ramsden Stakes (3200m) is run at Flemington on May 19.