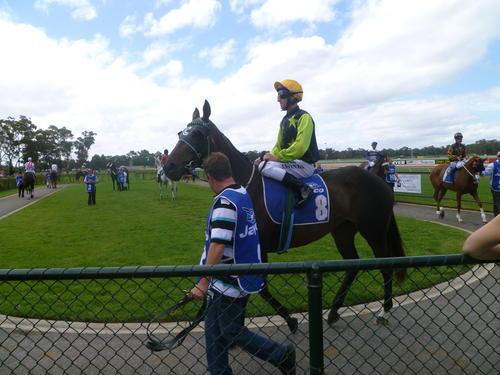 Pat Carey rounded out an interesting week in style at Bendigo today when talented mare Our Serena won the $75,000 Summer Showcase Final (2400m) in impressive fashion.


On Wednesday Carey was left wondering what could have been when another of the stable's rising staying talents Cedarberg was nabbed in the final metre of his hometown Mornington Cup.

Today things went Carey's way with Our Serena proving too strong for her rivals in scoring a richly reserved feature race success.

Recently having earned black type when second in the Bagot Handicap, Our Serena will be nominated for the Group Two $400,000 Adelaide Cup.

"It's a lovely race to win," Carey said. "Notwithstanding this filly's been deserving of a win."

"She's run some very credible and meritorous races in a lot better company and I'm glad to see her win another race."

"When you run second in the Bagot and you come back into this race with the same weight it places you pretty well," he added.

"She's a very durable horse and she applies herself well to her racing. She was ridden perfectly – James Winks rode her really well today."

"She will be nominated for something like the Adelaide Cup. We'll see where we go to from there – either that or the Roy Higgins Quality," Carey summed up.

Carey took a shine to the daughter of Fantastic Light at the 2008 Magic Millions National Yearling Sale and he went to $24,000 to buy her from the draft of Emerald Thoroughbreds.

With a string of excellent runs in quality race, the promising mare has already earned her connections $114,395.

Our Serena is a daughter of former outstanding racehorse and Breeders Cup Turf champion Fantastic Light.

Worldwide Fantastic Light has sired 438 winners – 27 of them having been successful at stakes level – headed in Australasia by Mission Critical, Playwright and It'llbefantastic.

Tygry, Our Serena's dam, is an unraced but well related Silver Hawk mare. She is from the stakes winning Zilzal mare Monaassabaat making her a half sister to stakes winning juvenile Echo River.

Further back hers is an outstanding family. Our Serena's third dam is the former American champion It's in the Air – a 16 time winning Mr. Prospector mare who was five times successful in Group One company.

Other Group Ones in the family include Alverta, Storming Home, Music Note and Musical Chimes.