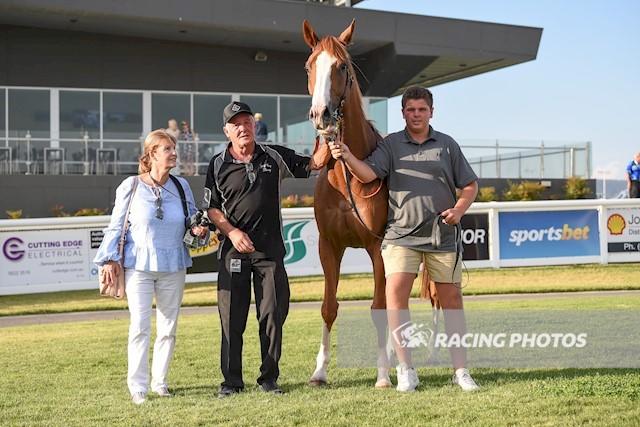 North Afrika finally broke through last night after a frustrating run of minor placings that would test any owners patience, but he left no doubt last night with his four length win at Racing.com Park (Pakenham).

Well-rated by in-form apprentice Jack Martin, North Afrika kicked away on straightening and the race was always in his keeping.

North Afrika is a handsomely marked son of Starcraft, out of the mare Willow, he was bred by Wyadup Valley Farm’s Trevor and Terrie Delroy who have been strong supporters of the stable for many years. Willow has produced stakes winners, Durnford and Ulundi, amongst her foals and North Afrika looks well on the way to achieving more success.

The win completed the second leg of a running double for Epsom Lodge, continuing our good form over the last month. Much thanks to our dedicated and enthusiastic staff for their efforts in producing our horses in superb order on the night.

Special mention to Brodie Addison who led in his first winner for the stable. Brodie is the son of Hayley Addison, who is the clerk of the scales for Racing Victoria, and the grandson of well-known Mornington trackwork clocker Les O’Briem.