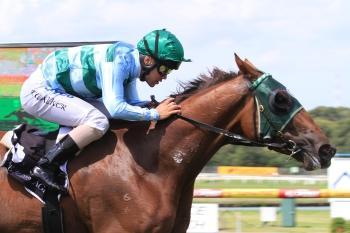 CEDARBERG ON TRACK FOR HOMETOWN CUP

Cedarberg wins at Sandown Hillside on Wednesday.
Underrated stayer Cedarberg will try to win his home town Cup at Mornington on a seven-day back up after landing the New Saturday Age Cup at Sandown.

Trainer Pat Carey is confident the four-year-old can rise to the challenge but would have preferred to have given the gelding his lead-up race as planned over 2000 metres last Saturday at Caulfield.

The New Saturday Age Cup was rescheduled to Sandown on Wednesday over an amended distance of 1800m because of last weekend's torrential rain, but it made no difference to Cedarberg who posted his third win in impressive fashion.

Jockey Michael Walker said the two-length victory over King Diamond and Down Under Boy was surprisingly easy.

"Coming down the dip (in the straight) I hadn't really asked him and nothing was coming," Walker said.

"I let the horse down and he drew away."

Carey likened the win to Cedarberg's success last spring in the Listed Ansett Classic (2400m)at Sandown when the field also scouted wide in the straight.

"He looked really good winning today and when he was challenged he gave plenty," Carey said.

Carey said the Mornington Cup was the gelding's primary autumn target and that he was also nominated for the Australian Cup (2000m) at Flemington on March 12.

"We would be mad not to run (in the Mornington Cup)," Carey said.

"There is fantastic incentive there with it being $300,000 and on his home track.

"He is an athletic sort of horse and he has backed up well before."

Cedarberg was entered for both the Caulfield and Melbourne Cups last year but didn't run in either.

Michael Walker
Pat Carey
Cedarberg
He wasn't paid up in September for the Caulfield Cup the following month while he failed to gain a Melbourne Cup run after he finished ninth to Maluckyday in The Lexus at Flemington on Derby Day.

Carey has always believed in the Helenus gelding who was galloped on when he finished seventh to Shoot Out in last year's AJC Australian Derby.

TAB Sportsbet has him at $26 for the Australian Cup.