London Stripe by a nose! 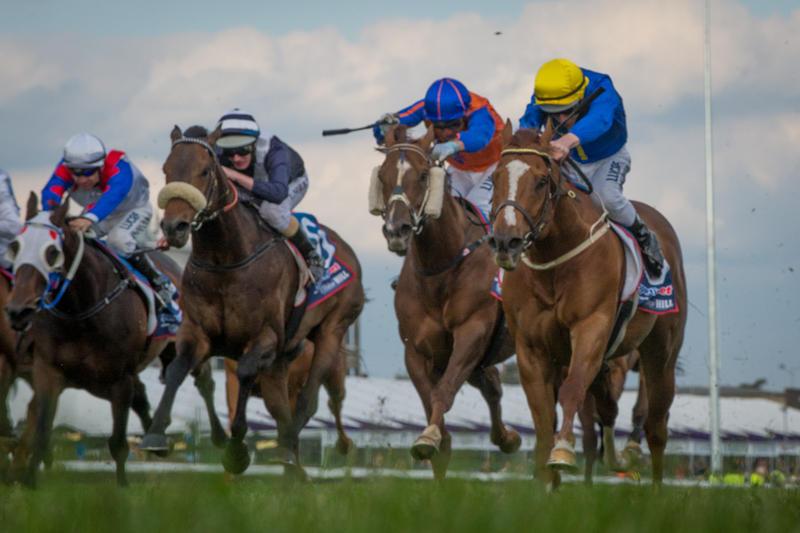 It has been a long and winding road for London Stripe (Rock of Gibraltar/Agenda), who scored his second Australian win at Caulfield today. Bred in Ireland, he started his racing career in England, and as Pat recalled today he won twice, then came second to Caulfield Cup contender Dandino in the King George V Handicap at Ascot.   This performance caught the eye of Lloyd Williams' talent scouts, and he came over to join team Williams in 2010.

Current owner Steve Watkins – breeder and trainer of VRC Derby winner Abariddy – bought London Stripe in 2012, and after a lengthy spell sent him  to Pat last year. HIs first Australian win came at Moonee Valley late last year, and the horse seems to have formed a strong partnership with jockey Damien Lane.  Damien gave him a masterful ride today to win in a bob-of-the-head finish.

London Stripe regularly enjoys his sessions of alternate training at Balnarring and Dromana beaches. Last week at Balnarring he was paid a visit by a pair of dolphins whilst wading with stablemate General Jackson and after the initial shock of seeing his new found sea friends, both he and "The General" enjoyed the dolphins company before rolling like puppies in the sand.

Congratulations to owners Steve, Christy and Sally Watkins, and to our "Epsom Lodge" staff,  also thanks to farrier Lee McDonald, our Vets and Equine massage therapist Deryn Rowe from Strides Ahead .  We are fortunate to have a dedicated and skilled team to support us in caring for our horses and we appreciate the hard work everyone puts in to help each horse achieve their maximum potential.