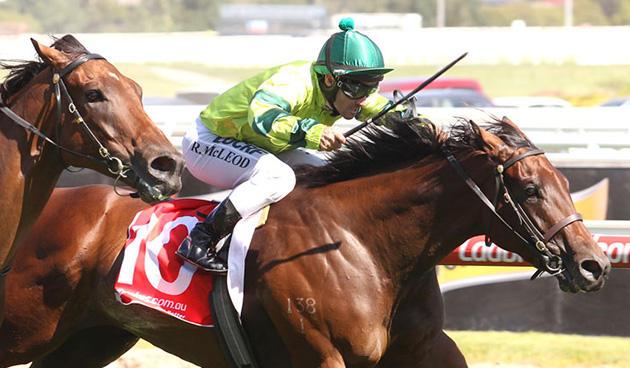 Trainer Pat Carey was the toast of Caulfield on Saturday – even though he wasn't in the state.

Mornington horseman Carey was in Sydney for the Inglis Classic sales, but wife Cheryl was trackside as Shakespearean Lass claimed the Listed WJ Adams Stakes (1000m) – capping a race-to-race double after Dan Zephyr strung together consecutive wins, in the John Moule Handicap (1400m).

Cheryl – the sister of Melbourne Cup-winning trainer John Meagher – said the only souring element of the day was Pat's absence, but did concede he might have more to spend at the sales after the two wins netted connections $121,500.

"I'm disappointed he's not here, because he works so hard," Cheryl said.

"He's so hands on with all his horses, we're only a fairly small stable.

"With the few horses we do have, he does an amazing job with them – everyone gets a chance.

"He backs his own judgement, and he's generally pretty well right."

Cheryl added there was more sentimentality behind Shakespearean Lass' success, given their history with the broodmare.

"It doesn't matter how long you've been in it [racing], when you see these horses … especially when you see them as babies, and this filly was just a baby and needed time and we trained the mother [Eliza Dream] … it's that little bit more special going to the next generation," she said.

"It's good to see the owners back you up and follow it through.

"Pat does a pretty good job with what we've got – it's pretty much a family team effort."

Among Carey's career crowning glories have been wins in The BMW (Cedarberg), Australian Derby (Ethiopia) and Crown Oaks (Arapaho Miss), but Cheryl said being typecast as a specialist with stayers did a disservice to her husband.

"I do get a little cross about that, when they say, 'He's a good trainer of stayers'," she said.

"I get really annoyed because that's unfair.

"That's because we're private buyers, and don't have big clients as such.

"We have to watch what we do, but we do it together and pick it to pieces.

reprinted with kind permission of racing.com