Kareem of the Crop 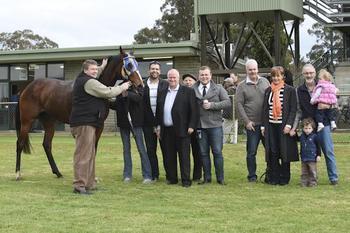 It was a long wait which was well rewarded for connections of 3 year old Kareeming (Nadeem/Karamah) when he scored his maiden win at Seymour on Thursday 12th June.  Kareeming races in the colours of Clanbrooke Racing, old friends along with new friends of ours at Epsom Lodge, and he has about 40 very excited owners.

This was only Kareeming's second start, his first being a second by a lip on debut at Mornington.  A well-judged ride by apprentice Aaron Mitchell saw Kareeming take a position mid-field, then work home in the straight to score by half a length, with what looked like a bit in reserve.

" Kareeming did you all proud, and it looks like all involved will be having a bit of fun with him in future"