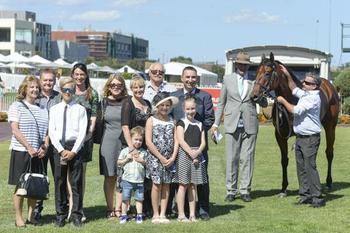 It was a most unusual running double at Caulfield today with the winners of race 6 and race 7 (Dan Zephyr and Shakespearean Lass) both out of the same mare – Eliza Dream.

Eliza Dream was trained by Pat for Colin Purss and partners, and she won 3 races including 1 in the city during her racing career,  The partners retained the mare when she retired to Eliza Park and she produced seven foals before her sad passing last year.  Her first foal two foals Ivory Cognac and Ferreus were both multiple winners.

Dan Zephyr (by Danbird) is her third foal, and today’s win in the John Moule Handicap at Caulfield is his second city win in a week, and the second time in his career that he has won two on the trot!

Shakespearean Lass (by Written Tycoon) is Eliza Dream’s fourth foal, and Shakey’s win in the Listed WJ Adams Stakes was her fifth from 13 starts and her first at black-type level.

There are three little brothers to come up through the ranks, a two year old,  a yearling who is due to go to the breakers soon, and  a weanling.  They certainly have some big shoes to fill!

This is a remarkable story of loyalty and patience, rare in the racing industry today.  A nucleus of the partners who raced Eliza Dream starting in 2004 have remained together through the highs and lows of racing and breeding. They have remained loyal to their horses, their trainer, to Eliza Park and Sue Ellis, and to each other.  They have nurtured and nursed their horses through some worrying times and they thoroughly deserve the success they have achieved.

Shakespearean Lass will eventually assume the brood mare mantle however she has the challenge of climbing the Racing ladder with many many more wins ahead of her before she is ready to retire.

Thanks again and CONGRATULATIONS to all the owners for their loyalty and continued support.