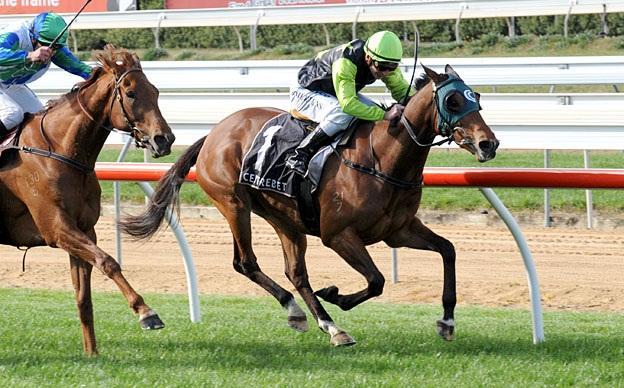 Dame Claire triumphed in what became a survival of the toughest in Saturday's Listed Ansett Classic at Mornington.

With no metropolitan meeting in Melbourne due to the AFL grand final, racing at Mornington took centre stage with the Ansett Classic the feature.

Tasmanian The Cleaner ensured the 2413 metre race wasn't for the faint hearted, establishing a huge midrace lead to string the field out.

When he began to tire coming to the home turn it was left to Dame Claire, last year's winner I'm Jake and favourite Storm Burst to battle it out with the rest of the field many lengths away.

A rails run proved telling for Dame Claire ($17) and her jockey Peter Mertens and the mare had enough in the tank to deny I'm Jake ($15) by a half-length.

Such was the dominance of the first three across the line, there was close to seven lengths back to fourth placed Verdant.

"Obviously she was one of the toughest stayers in the race," Mertens said.

"I'm Jake is pretty tough when he's ridden that way. He made her earn it."

Dame Claire was having her second run from a short break and Mertens feared that might have told at the finish.

But the five-year-old pulled out all stops to get the verdict, her second at stakes level.

"From a long way out she was under a bit of pressure from I'm Jake.

"We were lucky we got the rails run."

Cheryl Carey, wife of trainer Pat Carey, said they were proud of the five-year-old who won the Listed Andrew Ramsden Stakes in May.

"We're very proud of her and very happy today."

Dame Claire remains in the mix for both the Caulfield and Melbourne Cups.