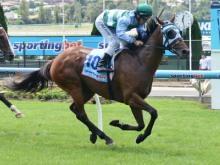 
Training horses like Gondokoro gives Pat Carey an opportunity to brush up on his geographical knowledge.

More history buff than geography student, Carey has become well acquainted with the Google search engine to learn the origins of names of horses owned by one of his major clients, Wyadup Valley Farm.

Owner Trevor Delroy's love affair with Africa is evident in the names of his Group One winners trained by Carey – Ethiopia (Australian Derby) and Cedarberg (BMW).

Another of Delroy's squad, Gondokoro is a leading contender for Saturday's Group One Queensland Oaks (2400m) at Eagle Farm.

"Trevor's named a lot of their horses with references to Africa and there's always an interesting story behind them," Carey said.

"Gondokoro's an example of that. She's named after a trading station along the Nile River."

Gondokoro produced an outstanding Queensland Oaks trial when she stormed home to finish a close second to Dear Demi in The Roses at Doomben on May 18.

Although Gondokoro has finished ahead of Dear Demi only once in their five clashes this season when they were fourth and fifth in the Vinery Stud Stakes, Carey believes she can turn the tables at Eagle Farm.

"There's not much between them and while Dear Demi's got the score on the board and I respect that, you could make an argument for beating her home the last two times," he said.

Carey confessed to making an error by instructing Rhys McLeod to come to the outside of the field from the 600 metre mark when Gondokoro finished third, with Dear Demi second, in the Australian Oaks won by Royal Descent.

"In hindsight we could have followed the winner through but we committed ourselves to staying in the middle of the track and we ran into a bit of traffic," he said.

"I was as big a party to it as anyone. Sometimes we take the initiative away from jockeys and I'm sure if we followed Royal Descent through we might've finished a lot closer to her than Dear Demi."

Although Gondokoro emerged from The Roses with a black eye and some minor scratches, Carey said she would be in peak condition for the Oaks.

"The bigger track at Eagle Farm suits horses like her with a big finish," he said.

"I'm not jumping at shadows but I'd like to see reasonable ground. Eagle Farm is a bit vulnerable at the moment when it's wet."