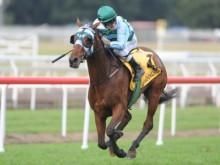 Gondokoro has claimed her second career victory in style, leading home an all Victorian quinella in today’s $400,000 Group 1 Queensland Oaks (2400m) at Eagle Farm in Brisbane.

Courtesy of a brilliant ride from jockey Rhys McLeod, the daughter of Zabeel beat another Victorian-trained filly by the same sire in Peter Moody’s Miss Zenella.

The fourth Group 1 triumph of trainer Pat Carey’s career, Carey paid tribute to what he described as a “perfect ride”.

“She’s a very strong staying filly who can improve with time as she furnishes and develops.

“We’re really focussed on the autumn (2014) with her but we’ll see what her owner Trevor Delroy wants to do in the Spring.”

Settling in a midfield position on the rail tracking the well-backed favourite Dear Demi ($2.90F), McLeod made what may have been the race-winning move approaching the 800 metre mark.

As Nash Rawiller elected to get off the fence on Dear Demi, McLeod allowed Gondokoro ($4.40) to make ground along the inside, before angling off the rail on the home turn and entering the home straight with only two horses in front of him.

Racing two lengths clear of Miss Zenalla at the top of the straight, Gondokoro actually extended the margin over the runner-up over the final 200 metres, with the Gai Waterhouse-trained Vaquera ($10) a further two lengths away in third position for Victorian jockey Michael Rodd.

Speaking after the victory, McLeod paid tribute to both Carey and Delroy for continuing to support him.

“It’s quite special winning in these colours again for Pat Carey and Trevor Delroy,” McLeod said.

“You can make an argument that we should have probably beaten Dear Demi home in her last two starts.

“I honestly thought I was on the best horse coming into the race and she proved it.”

In the day’s other feature the Group 2 Queensland Guineas (1400m), jockey Chris Munce capped a wonderful week partnering the Kelso Wood-trained Sizzling to a memorable victory.

Only four days after receiving the news that he was in remission from throat cancer, Munce guided the track specialist to a win that rockets the three-year-old into calculations for next Saturday’s $1 million Group 1 Stradbroke Handicap (1400m).

Unbeaten on wet ground with a record that now reads five wins a second placing from six starts at Eagle Farm, Wood said after the race that the son of Snitzel would definitely press ahead to next weekend’s Stradbroke.

Click here to view the full list of results for the Group 1 Queensland Oaks, or the rest of today’s Eagle Farm program