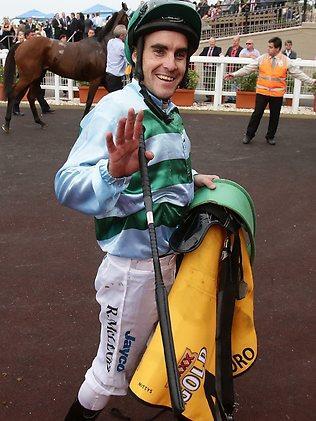 Gondokoro has achieved a long-held ambition for owner Trevor Delroy with her authoritative win in the 2013 Queensland Oaks.

A masterful ride by Rhys McLeod saw Gondokoro settle mid field, then slide up inside of arch rival Dear Demi at about the 800m mark. Rhys made the most of his opportunities to hit the front 300m from home, and work Gondokoro strongly to the line to win by 3 lengths.

"You would not see a better ride on any racecourse in Australia" and rated the ride "35 out of 10".

Rhys was modest about his ride, saying

"I honestly thought I was on the best horse in the race…it was wonderful to do it for Pat and Trev."

Trainer Pat Carey and owner/breeder Trevor Delroy have developed a redoubtable partnership, this being their third Group 1 winner together.  In an era where staying horses are normally imports – either from NZ or increasingly from Europe – Delroy's proven ability to breed top flight stayers is worthy of note. So far Delroy has bred 2010 BMW winner Cedarberg, 2012 ATC Derby winner Ethiopia, 2012 SA Derby winner Zabeelionaire, and now Gondokoro – full sister to Zabeelionaire – 2013 QTC Oaks winner.  This is in addition to rising stars Angola and Durnford, and emerging jumper Karoo.

Pat was full of praise for Gondokoro, calling her

"A very strong staying filly, (who) can only improve with time as she furnishes out."

As for future plans for Gondokoro, Pat said

"We've been focussed on the autumn with her, so we'll see what Trevor wants to do with her and make plans, but there is no rush."

This is the second Oaks winner for Carey, who trained VRC Oaks winner Arapaho Miss and 4th placed Royale Harmony in 2007.

"Perhaps there is no better trainer of staying horses in this country than Pat Carey."

There is no "perhaps" about it!