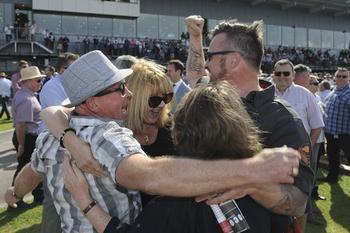 A fantastic result at Cranbourne this afternoon with General Jackson winning the Apache Cat Classic over 1000m.  "The General" was at his blistering best from the gate, and took control of the race from the start to the finish.  Gun apprentice Patrick Moloney gave him a great ride, and told reporters that when others started their runs in the straight, The General found an extra kick, pulling away from the much-touted import Super One and giving him wind-burn.

General Jackson joined our stable a year ago from Queensland, and has gone very close to winning on several occasions.  Congratulations to  owners  Jenny, Cath and Terry, Ryan, Steve, Alberto and Cheryl, along with owner breeder Roy.

What a super old war-horse The General is – and what a day for master trainer Pat, almost landing the feature race double, with Kareeming coming second by a nostril in the Cranbourne Cup

We are fortunate to have a great group of people at Epsom Lodge, all of whom are dedicated to the horses in their care.  We appreciate the effort of all, particularly those who are there day in day out, doing the hard yards and unglamorous jobs that are the backbone of caring for our amazing equine athletes.