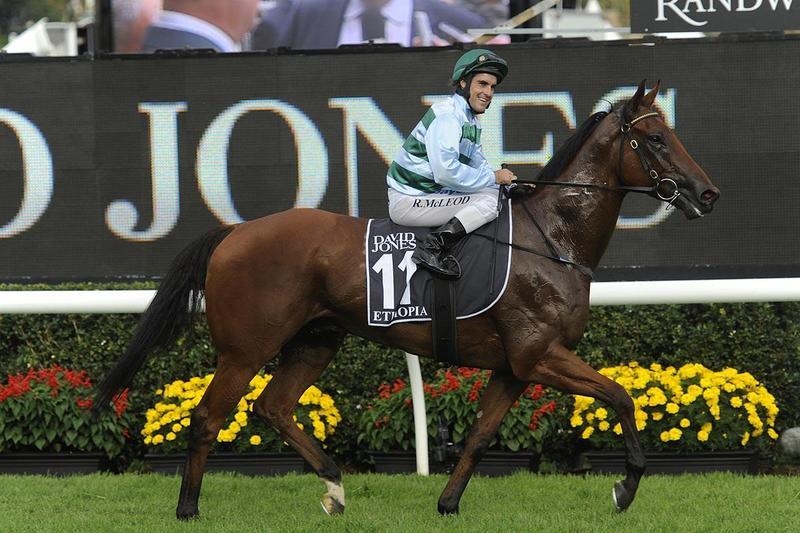 Ethiopia's lack of experience going into the Australian Derby dissuaded punters but not his trainer Pat Carey who maintained faith in his horse and underrated jockey Rhys McLeod.

Carey's trust was not misplaced with McLeod bringing the gelding with a well-timed run down the outside of the track to beat Polish Knight by a short neck to win the Classic at just his fourth start and become the first maiden since Silver Sharpe in 1970 to do so.

But Carey had plotted his path with precision, drawing on his experience with Cedarberg who didn't win but was an unlucky seventh two years ago.

Cedarberg went on the following year to win the BMW but died in a track accident last August when he was being prepared for a Cups campaign.

"There are a lot of comparisons between the two horses," Carey said.

"This fellow is very raw but is a classic stayer in the making.

"This is a special moment for me and for Rhys.

"Cedarberg went to the Derby at his fourth start and I wasn't concerned.

"I had a fit horse and he had done a lot of work so I didn't worry about any other horses.

"I was shattered when we lost Cedarberg but we have to move on."

Ethiopia is raced by his West Australian breeder Trevor Delroy as was Cedarberg with both horses by 2002 Victoria Derby winner Helenus.

Polish Knight's second was also the second of the day at Group One level for the Hawkes training team after All Too Hard was beaten by Golden Slipper winner Pierro in the Sires' Produce Stakes.

Polish Knight acted up in the stalls, a trait jockey Dwayne Dunn said had not helped his cause.

"He's done it before which is why he wears a barrier blanket," he said.

"He needs to overcome that obstacle to go to the next level when he comes back."

Laser Hawk ran an even race without threatening the leading pair to run third, 1-1/4 lengths away, with Strike The Stars ($11) fourth.

Silent Achiever, the New Zealand Derby winner, dropped out at the tail of the field and made some ground late but lacked the brilliant sprint she had shown in the past.

The Derby victory was the third at Group One level for the somewhat unheralded 29-year-old McLeod who joined the Carey stable as a 15-year-old.

"Rhys came to me for work experience weighing 28 kilos and he's been with me all the time," Carey said.

"I hope this win can be special for his career."

"He is the most underrated jockey in Australia," Rawiller said.

Carey said he was unsure of future plans for Ethiopia and a Cups campaign was not certain with the trainer ever mindful of what happened to Cedarberg.

"There's a high attrition rate for four-year-olds so it may not be the Cups," he said.

"We'll just think things over and celebrate this race."