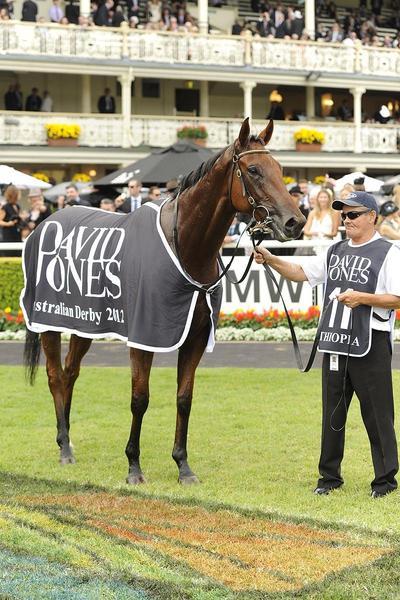 TRAINER Pat Carey admits that much of the skill in getting maiden performer Ethiopia to win the Australian Derby at Randwick on Saturday was gleaned nearly four decades ago when he was doing work experience at the Epsom training track.

As congratulatory calls flowed in from all over Australia, the Mornington-based Carey believes the nucleus of outstanding staying trainers at Epsom in the early 1970s was an invaluable period of his life.

Carey managed to take Ethiopia from a Sale maiden in February to winning Australia's most prestigious staying classic, a feat for which he has been widely praised.
Advertisement: Story continues below

''I was very lucky. I started at a young age with John Meagher,'' Carey said yesterday. ''He really showed me what training racehorses was all about, but more importantly, how to groom a stayer and how to use patience as your greatest training asset.

''And over the road we had George Hanlon, who produced so many cup winners from those boxes down at Epsom, and every morning I would run into Andy White, who was the ultimate professional at building a stayer. All of those hints and tips that I took in then probably paid dividends with this horse [on Saturday]. Those trainers had the uncanny knack of just making a stayer into a great stayer a work of art.''

While the South Australian Jockey Club is hoping that Carey will cross the country and compete in its derby, one suspects that Rule 1A of horse trainers of yesteryear was: never act on an afterthought.

''I'll talk to the owner, but he's come a very long way in a very short time, he's got everything ahead of him. I don't think the SA Derby will be on, and not even the Sydney Cup … you run the risk of wrecking all of the good work,'' he said.

And while Carey has heard all the talk about how Ethiopia now stands Australia's best chance to repel the foreign invasion and win the Melbourne Cup, he isn't quite sure what the spring holds. ''Sure, we'll have a look at the spring and I'm not saying we won't run in the majors, but history recently has shown that some four-year-olds just don't come back after a tough spring. But that won't happen to this bloke,'' he said.

''He will tell us. Ideally, a light spring followed by another light autumn could be on the cards.

''The point people miss is that these European horses come to Australia 100 per cent fit, muscled up and fully seasoned to take on the Melbourne Cup. Each horse that comes from Europe has been prepared for two and three seasons for a trip to Australia. None of them are here as a mere afterthought.

''That's why those great trainers, like the Meaghers and the Hanlons, always had terrific foundations in their stayers and they never deviated off their course.''

It's more than likely Ethiopia will head to the paddock. Carey will today meet with the three-year-old's Western Australian owners, who are also dedicated to the cause of winning staying races.

Carey is hell-bent on having a high-class stayer. If it's not this spring or next autumn, he and his owners are prepared to wait.