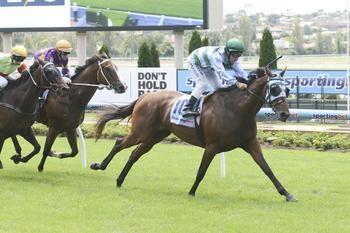 A drop in class always looked like being a good move for the promising filly Gondokoro – and at Moonee Valley on Monday she got it.

Switched back to a 1600m maiden at the Valley, Gondokoro did what might have been expected, putting away opposition distinctly inferior to that which she'd been meeting.

The only surprise was her $10 starting price.

Gondokoro, a full sister to South Australian Derby winner Zabeelionaire, came from midfield, rounded them up entering the straight and won by 1-1/2 lengths from Maddy's Angel ($6.50) with Samapinga ($5.50) a close third.

"She ran in the best races and even though she was well beaten in some of them, she ran well," Delroy said.

The best of Gondokoro's runs in stakes company came in the Oaks when she finished seventh to Dear Demi after connections made the wrong assessment of the race.

"I made a tactical error in the Oaks," Delroy said.

"We didn't think there'd be any pace on, but there was.

"She was too close to them and couldn't finish off."

With the benefit of her first-up run behind Meliora in the Armanasco, Gondokoro produced her best on Monday and will now embark on another Sydney mission with the Group One Vinery Stud Stakes (2000m) at Rosehill in April her aim.

"We just have to hope Dear Demi doesn't turn up," Delroy said.