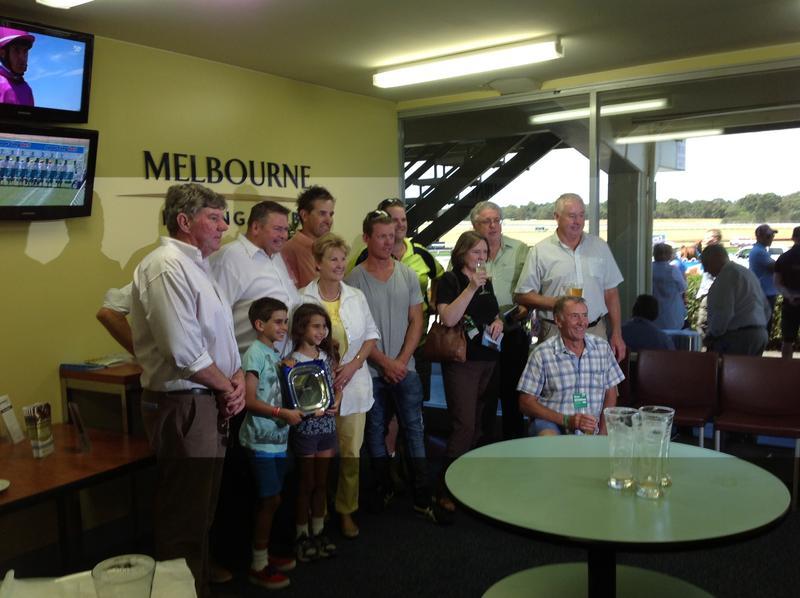 Pat Carey is well known for his magic touch with stayers, but he proved that he is no one-trick pony today with Donna Madiera, winner of her first ever start  – the 900m 2YO race at Betfair Park.

The daughter of  Henrythenavigator was bought  for $105 000 by Pat at the 2012  Melbourne Premier yearling sales, and is raced by a group of friends and family, some of whom are long-time owners.

Pat said "This win is terrific for a great group of owners, particularly for Bernadette O'Connor whose birthday it is today.  We also hope that it will be a boost  for Dennis Drew who is in hospital at the moment. We send him our congratulations, and best wishes for a speedy recovery."

Carey likened the performance to Rollick, a speedster in the late 1970s trained by Jim Moloney.

“She just few from the boxes. She’s is not big, but she is so sharp,” Carey said.

“She may not have her ability, but she has a bit of the Rollicks about her. She is just like her.

Rollick, ridden by Pat Hyland, held the 1000 metre track record at Sandown for many, many years.

Donna Madiera bounced out of the gates strongly, and led all the way, finishing over a length from the second horse, breaking the track record along the way.

Rhys McLeod plotted a path from her wide draw past Sworn Revenge, which was backed from $3 to $1.75 before easing slightly to start $1.80.

Prior to today's race she was unwanted in Blue Diamond markets, but her win has seen her price slashed from $151 to $26.

“We have always regarded her as sharp, but you come here unraced and you take your chances,” Carey said.

“There has not been a lot of public trials to take her to, which is unfortunate for the punters, but all we can do is prepare her the best we can at home.”