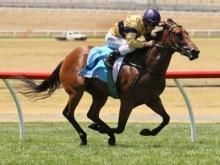 She might only be small but the Pat Carey-trained Donna Madeira showed she had plenty of speed when taking out the Swettenham Stud Dash For Cash Plate (900m) at Sportingbet Park Sandown today.

The daughter of Henrythenavigator has now been trimmed by the TAB from $151 prior to the win, into $26 for February’s $1 million Group 1 Patinack Farm Blue Diamond Stakes.

Speaking after the victory, Carey said Donna Madeira might not have had the ability or the size of her rivals but that she made up for it with her speed.

“She just flew from the boxes, she’s not big and she’s just so sharp and I couldn’t ask her to do anymore than what she’s done today,” Carey said.

“She’d had a couple of jump outs at home where she learnt a fair bit from one trial to another, but coming here today there was a bit of hype around about a couple of the horses so you’re always reserved in your judgement.

“It’s just a fantastic group of close friends and family that we’ve put together for this horse, so to come here and win with a filly like that makes it really sweet.”

Despite drifting in the betting from $14 to start a $20 outsider, Donna Madeira showed blistering early speed to jump and cross straight to the lead for jockey Rhys McLeod.

After skipping away from the well-backed favourite Sworn Revenge ($1.90) at the top of the straight, the diminutive filly proved too strong to the line, scoring by just under two lengths with Sworn Revenge in second and with the race-experienced Isolation ($2.50) finishing a further couple of lengths away in third.

Glen Boss, rider of the second placed Sworn Revenge, fired in a protest against the winner alleging that Rhys McLeod was insufficiently clear when he crossed to the front at around the 600m, however stewards quickly dismissed the objection on the grounds that the 1.8 length margin was too large to take the race off the winner.

Rhys McLeod was given an eight meeting suspension from the incident which begins on Monday the 21st of January.

The good news didn’t stop there for Carey who made it a double two races later when honest mare Perfectly Stunning finished too well for her rivals under the urgings of Craig Newitt in the Settlement Hotel Handicap (1300m).