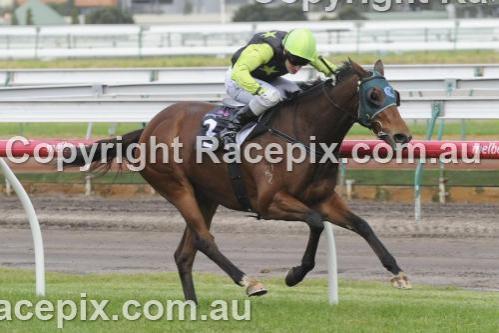 Pat Carey's success in staying races continued when Dame Claire led all the way to win the Andrew Ramsden Stakes at Flemington but the trainer played down spring expectations for the mare.

Dame Claire passed the first qualifying clause for the $6.2 million Melbourne Cup, the only other 3200m race run at Flemington apart from the Listed Ramsden.

But Carey suggested a race like the Sandown Cup would be a more suitable target for the rising five-year-old daughter of Danehill Dancer.

Ridden by premiership leader Craig Newitt, Dame Claire ($8) wasn't the best to begin as usual but soon worked her way to the front, opening up a break on the field and was never threatened.

She had 1-1/4 lengths to spare on the line from topweight Maythehorsebemagic ($5) with Crafty Cruiser ($9.50) two lengths away third.

"She's not a big mare, but she's a durable little mare and very, very tough.

"To carry 9st1lb (57.5kg) and win like that was a great effort and she was beautifully rated by Craig Newitt.

"It was really good to watch."

Dame Claire, a winner of five of her 24 starts, is in a purple patch of form having made it back to back victories at Flemington following her 2800m win on May 5.

"She finds a bit of rhythm when she gets forward with a bit of fresh air around her," Carey said.

"Last year she ran really well (when fifth) in the (VRC) St Leger and I knew then that the door was open to run over these trips," Carey said.

"Winter stayers don't usually win spring Cups but something like the Sandown Cup, those type of races are ideal for horses with her rating (86 before Saturday's win)."

Newitt, who landed a double at Flemington having won the Trevor Clarke Hcp (1000m) for two-year-olds on first starter Eximius, said Dame Claire would "literally run 4000 metres on her ear".

"I couldn't pull her up after the race. She's not overly big but she's got a great set of lungs on her.

"For 3200 metres she didn't relax at all and just wanted to run through the bridle and go quicker and quicker.

"I let her slide at the half-mile (800m) she was going just as strong on the line. She has unbelievable stamina.