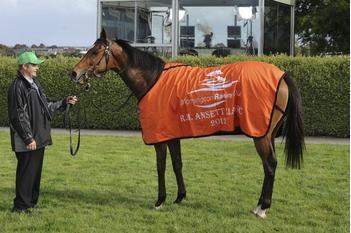 Tough staying mare Dame Claire (NZ) took the second stakes victory of her career at Mornington on Saturday in the A$120,000 Listed RM Ansett Classic (2413m) for her trainer Pat Carey.

A daughter of Danehill Dancer, Dame Claire (ex Lovely Actress) won the Listed Andrew Ramsden Stakes (3200m) at Flemington in May and carried 58 kilograms to victory in Saturday’s race.

Ridden by jockey Peter Mertens, the five-year-old settled second behind race leader The Cleaner who raced to an eight-length lead with a lap to run. In a smart ride, Mertens took the rails run from the tiring pacemaker rounding the bend and held off the advances of last year’s winner I’m Jake (Pins) and Storm Burst (Danehill Dancer) to win by half-a-length.

Dame Claire was having her second start after a short break and Merten’s fears of her tiring towards the finish were unfounded. The five-year-old mare holds nominations for the Caulfield and Melbourne Cups.

Bred by Monovale Holdings, Dame Claire was offered by Monovale Farm at New Zealand Bloodstock's 2009 Karaka Premier Sale and was purchased by Pat Carey for $30,000.

From the French broodmare Lovely Actress (Kaldoun), Dame Claire has an unraced three-year-old half-brother by Savabeel who was purchased by Malua Bloodstock for $30,000 at the 2009 Karaka Select Sale.