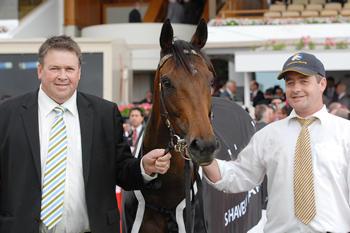 She's small and cost only $3500 but Influential Miss showed that just about anyone can be a major player on Melbourne Cup day when she landed the Schiavello Plate at Flemington.

Trainer Pat Carey said the five-year-old mare was bought as a weanling in a Darley reduction sale and for months targeted Tuesday's race which he won five years ago with Candy Vale.

Candy Vale went on to win a Group Two Sunline Stakes and finish second to Roman Arch in the 2006 Australian Cup.

"We targeted this race for her (Influential Miss) a fair while ago and it is just nice to turn up on the day and win," Carey said.

"She is a very small filly and weighs around 415kg or 416kg which gives a lot of people out there with small horses hope."

Influential Miss was easy in betting from $21 to $26 but was given a patient ride by Steven King who pulled her to the centre of the track to score by a length from Well Rounded ($31) with Charlie's Queen ($51) a half-head away third in the 1700m race.

Pat Carey & Influential Miss
"She's a nice filly and this (slow track) was ideal ground for her," Carey said.

"She has a good turn of foot."

Tuesday's win was Influential Miss' fourth win in 18 starts and her first in the city.

If you would like any photo's of Influential Miss last 2 wins please go to www.racepixvic.com.au  there are some really great shots!!