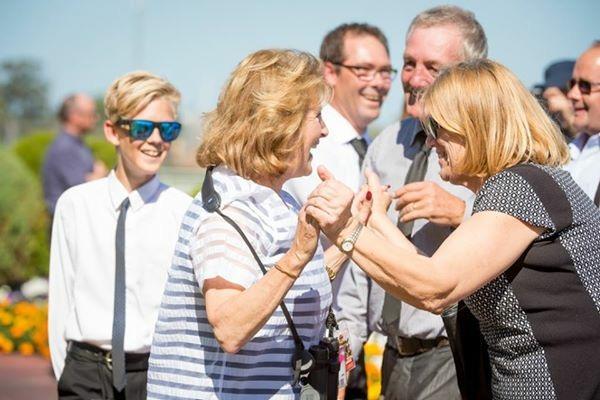 Trainer Pat Carey is almost never absent whenever he has a runner at the races.

But after Saturday's spectacular day of success,  when the Mornington handler left his wife, Cheryl, in charge of proceedings, Carey might consider spending a few more afternoons otherwise engaged on raceday.

Carey was up in Sydney attending the Inglis yearling sales although he had a trio of gallopers – last start Flemington winner Dan Zephyr, promising sprinter Shakespearean Lass and progressive stayer All I Survey going around at Caulfield.

While All I Survey, one of the stable's "pet " projects finished unplaced, the others won, leaving Cheryl to take on a very unfamiliar role, that of interview subject for the media.

She joked after Shakespearean Lass' win  that she usually gets introduced as "John Meagher's sister or Pat Carey's wife", but that deep racing background –  Meagher was for years a successful Melbourne Cup-winning Flemington trainer – means she is well able to handle anything that comes her way on raceday, especially a rare city double for what is often referred to as a "boutique" stable.

She was particularly pleased with the success of the mare Shakespearean Lass, who sprang a $21 surprise in the listed WJ Adams Stakes, earning precious black type for her pedigree page

"We thought she might be a little underdone for this race, but she has toughed it out really well to the line. I  couldn't be happier," she said of the four-year-old, who has progressed from benchmark grade to black-type company in a matter of weeks.

"Pat needs a lot of credit for that. He knows the filly, he knew the dam [Eliza Dream]. He's put faith in her so it backs our judgement. It was a great ride by Rhys (McLeod) too.

"The black type, it's very good for her going forward as a broodmare. We are just very happy with this today. Anything else is a bonus."

Dan Zephyr had earlier brought up the first leg of the double when, partnered by claiming apprentice Michael Dee, he had followed up his Flemington win a week earlier by beating Australian Cup hopeful He Or She.

It might have been her turn in the limelight, but Cheryl was trying very hard to give the credit to her absent husband as she talked about the virtues of a family-run, hands-on operation that concentrates on a smaller team of gallopers.

"I am disappointed he is not here, he works really hard, he is so hands-on with all his horses. We are only a small stable, he does a great job. I am not just saying that. With the few horses we do have he does an amazing job, they all get their chance … we don't mess around, we don't waste owners' money, but he backs his own judgement and he is generally pretty well right. "

Carey's biggest triumphs – his four group 1 wins – have come with horses who are better over a distance. Cedarberg won the BMW in Sydney, Gondokoro and Arapaho Miss respectively won Queensland and VRC Oaks while Ethiopia won the ATC Derby.

Cheryl hopes that wins by the likes of Shakespearean Lass over the 1000 metres might help dispel the idea that her husband is only a trainer for slow-maturing horses who need some ground.

"I must admit that I do get a little cross about that when people say he's a good trainer of stayers. I get really annoyed … I think that's unfair," she said