Australian Derby winner Ethiopia’s owners go to hell and back 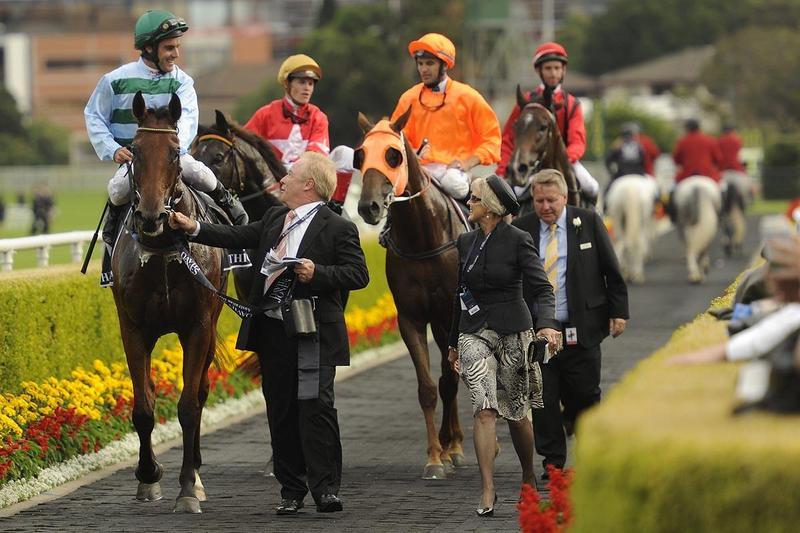 Australian Derby winner Ethiopia's owners go to hell and back

AS Pat Carey and owner Trevor Delroy celebrated Ethiopia's memorable $1.5 million Australian Derby win at Randwick yesterday, there was a sense that it was meant to be for the first maiden to win the Derby since Silver Sharpe in 1970.

The pair had been to hell and back this season, having to endure the best and worst racing can offer.

Carey, the Mornington-based trainer and one of the genuine nice guys in racing, thought he had his once-in-a-lifetime horse in Cedarberg, then tragedy struck.

The promising stayer won The BMW last year and was among the early favourites for the Caulfield and Melbourne Cups when he dropped dead during Moonee Valley trackwork last August.

But then along came Ethiopia. He is by the West Australian-based sire Helenus out of a Spectrum mare, the same cross as Cedarberg.

They were born on the same farm near Margaret River and were bred and owned by Delroy.

Amazingly, both tackled the Australian Derby at their fourth start – Cedarberg ran 10th behind Shoot Out two years ago, while Ethiopia won.
Melbourne Cup contender dies on track

"Losing Cedarberg was devastating," Carey said. "But as difficult as it was, you can't dwell on those things, you have to get on with it."

Carey admitted after Cedarberg's death he wondered if he would ever get a stayer of that quality again.

But there was something about Ethiopia and the trainer started to dream again. "The similarities between the two horses haven't gone unnoticed with us," Carey said.

"They are both big, raw, scopey staying horses."

And Ethiopia has now emulated Cedarberg as a Group 1 winner.

In a thrilling finish, Ethiopia ($15) provided a fairytale result for Carey and Delroy with a storming last-to-first run to deny Polish Knight ($8) by a short neck, with favourite Laser Hawk ($3.20) a long head away third.

It was a training triumph for Carey as Ethiopia, who was without a win in his first three starts and had earned only $53,000.

Ethiopia even had an interrupted preparation, having been balloted out of the Rosehill Guineas two weeks ago. This meant he had not raced since his eye-catching second behind Highly Recommended in the Alister Clark Stakes at Moonee Valley a month ago.

"I wasn't worried he missed the Guineas," Carey said. "He's a natural stayer and he could be a bit special.

"He's still very raw but is a classic stayer in the making."

Carey said Ethiopia will be spelled but he isn't locked in to a cups campaign this spring.

"The spring can be very tough on four-year-olds," he said. "We see a high attrition rate every year. I'll let the horse tell us if he is ready for a cups campaign."

Ethiopia gave jockey Rhys McLeod his third Group 1 but easily the biggest success of his career.

McLeod said the win was even more special as he had been apprenticed to Carey.

"Pat and (wife) Cheryl have been like second parents to me so to win the Derby for them is quite a thrill," McLeod said.

"We have had a lot of faith in this horse for a while now."