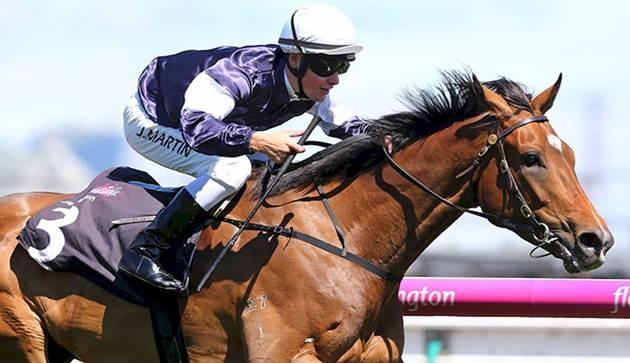 The 3kg-claiming apprentice had his first ride for Macedon Lodge on the same horse on Pakenham Cup Day last week, finishing second as a $41 shot to Gallic Chieftain.

Martin and Goathland were dominant on the back-up together, running away from Charlevoix by 4.25 lengths for trainer Robert Hickmott.

The 21-year-old, who is indentured to Mornington trainer Pat Carey, said he was surprised to get the chance to don the famous navy blue and white silks, but hopes it is just the start of an association with the five-time Melbourne Cup winner.

“It was a bit of a shock when I first got the call to ride his [Williams’] horse for the first time,” Martin said post-race.

“Hopefully, I’ve done the job well since then, and it’s great to get a winner for him.

“I just knew the horse was going to be a stayer, and if the pace was genuine, he’d be right in it – and he was.”

It was Martin’s first Saturday winner, and just his third metro winner – having broken through in the city aboard Ballinaclash at Moonee Valley in September.

His form continued the very next race, Martin riding Invincible Al into second for Patrick Payne – behind Khaki in the Dorevitch Pathology Charity Plate (1200m).

Martin was one of three apprentices to return a winner on Saturday, Ben Allen joining him with his 18th and 19th metro winners of the season via Lyuba in the Lanec Services Handicap (1000m) and Ozi Choice in the Western Health Foundation Handicap (1400m), both for Darren Weir, while Beau Mertens got his 14th of 2016-17 in town – aboard blowout chance Aurum Spirit in the Urban Maintenance Systems Handicap (1600m).